Anything remotely interesting about me can now be found here.

Loving mommy-hood.  Seriously.  This is ridiculously good.
Posted by HD at 9:17 PM No comments:

And Then There Were Three

Talk about a cliffhanger.  Sorry about that.  I've literally looked at my blog a bazillion times and every time I thought about updating, the amount of effort I was thinking it would take totally overwhelmed me. 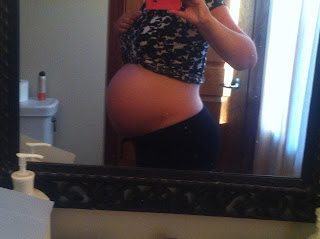 The morning we left for the hospital. 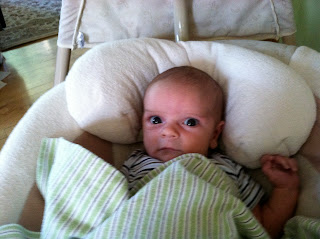 This is Miles David.
He's now 12 weeks old.  Holy smackeroos.  He's perfect and smiley and lovey and all ours.  I say daily, many times a day, I can't believe he's ours.  We are oh so thankful.

Here's the story.
We went in to our hospital at 8:00 am on Wednesday, June 20 to begin the induction. Pitocin was the course of action decided on and I started contracting right away. Around 10:00 am or so I had dilated enough for them to break my water. Which is when it got bad. I was contracting almost a minute long with no more than 1-2 mins in between and they were intense.

Around 3:30 pm my friend came to visit, who was the anesthetist on duty that day. The pain was so intense and the outlook (still only 4 cm) was bleak for delivering any time soon. So I got the epidural around 4:00 pm.
Unfortunately, epidural went down my body instead of staying in my mid-section; legs and feet were completely numb but I could still feel contractions.

Around 6:00 pm I cried uncle and was given another med for the pain. This worked for about 4 hours and then I was even at 9 cm.  But alas, birth was still far off. One of the things they tried to do was flip baby. He was facing the wrong way, sunny side up.

Got another does of pain meds around 1:00 am and began pushing. For two hours. And all I managed to do was push baby forward and then back again. The doctor came in around 4ish and finally determined that baby boy would have to break my pelvis bone in order to get out vaginally. He just wouldn't turn and would not fit. So I was prepped for a c-section and Miles David made his appearance at 5:49 am on June 21 weighing an impressive 9 lbs 11.8 oz, 22 1/2 inches long.

I was so completely drugged up that keeping my eyes open was almost impossible.  I stayed in recovery for six hours or so until I could maneuver myself to a different bed.  Then I was wheeled to my room where we stayed until Sunday.

So of course there were those six hours I was out of commission--super dad to the rescue!  That'll have to wait until another post though.  I'm exhausted...back to work already and it's 9:30 pm--way past my bedtime! 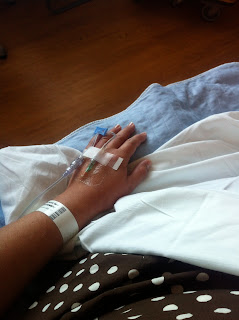 This was after way too many failed attempts in the sides of my arms. Ouch. 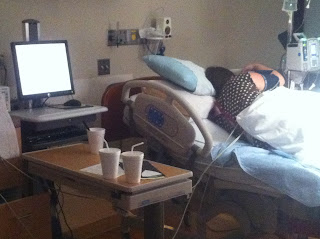 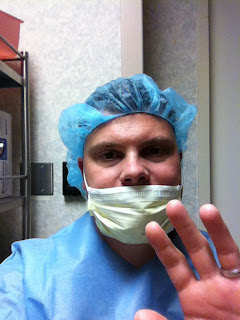 Going into the O.R. 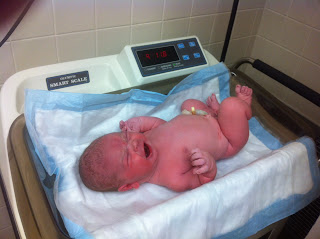 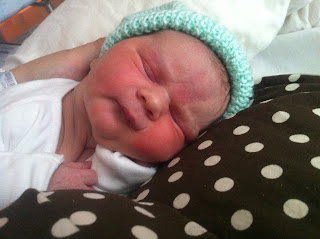 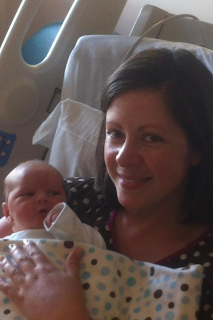 Happy mama--still a little out of it. 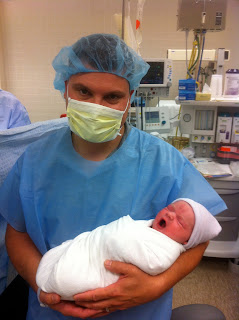 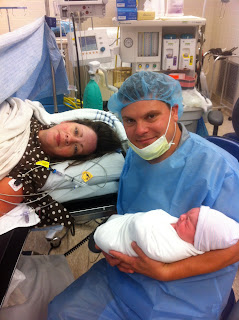 Me, drugged and emotional. 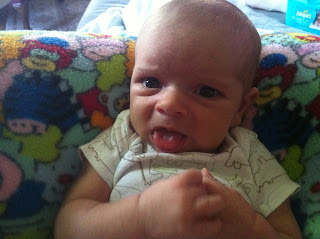 One of the many faces of Miles. 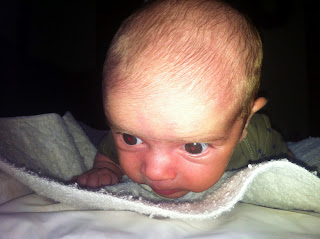 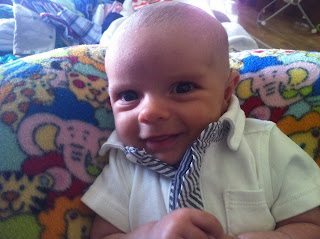 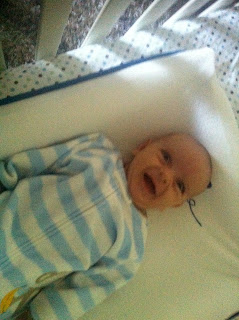 This is what I wake up to every day.  I have no idea how we got so lucky. 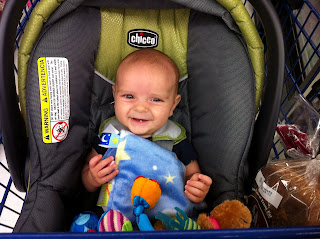 I've phoned the hospital and we're all systems go.  So in about two hours we'll begin the process of bringing our baby boy to the outside world.

I'm better now than I was yesterday, but I'm still scared.  I think it's the unknown.  I know everything will be great, but it's just the zillion worries I have running through my head.

Soooo, I've been doing some thinking.  It wasn't until after my appointment, and my last post, that I started to really question the early induction.  And then once I asked a question it was like the floodgates opened.  All of a sudden I had people all around me supporting my questioning.

After a lot more research, picking people's brains, and self-searching, we've decided on a newer plan.

If Bubby has not arrived on his own by Sunday evening but is still moving well, I will call the hospital at my assigned time and postpone the induction.  I have a regular doctor's appointment set up for Monday morning.  I will go through the fetal heart and contraction monitoring, the ultrasound, and another cervical check.  If there is still nothing happening in the labor department that is my uterus, I will reschedule the induction and go through with it.

I feel good about this decision and so does my body.  I would love to go into labor naturally but I know it's not always in the cards for everyone.

Man, apparently my listening skills are off.  Yesterday was more than a quick doctor's appointment.  It was good I had nothing else going on--I was there almost 2 hours.

Per usual, I had my blood pressure checked and had to step on the scale.  My blood pressure was 150 something over some other ungodly high number.  The only other time my BP has been high was due to operator error.  When she took my BP this time it really hurt.  She had the cuff up really high on my arm and she had it really tight from the get go.  She said she'd take it again a little later, which she did and it was totally normal.

Then I got to relax in a recliner while they did fetal monitoring for 20 minutes.  They had the heart monitor on baby and the contraction monitor on me.  I assured her I was having no contractions.  And according to the machine, I was right.

Since baby's heart rate was good and the contractions were absent, I moved on to Ultrasound.  Here they were checking the fluids, heart rate again, and some other things.  But again, everything was great.

Finally it was on to see the doctor.  The nurse that took me back asked, again, if I'd be interested in that complimentary cervical check.  To which I again declined...only to have the doctor come in a bit later and so, no way, you're getting it today.

I believe she said I was 1-2 cm, 50% effaced, and softened.  I really don't know what that means other than the dilation.

But now we have a new plan. I return Thursday for a repeat of these tests--minus the cervical exam.   If all is good then I get to play wait and see...until Sunday that is.  If by Sunday baby boy has not arrived, I will be checking into the hospital to begin the induction process.

So that's the story.

I was warned yesterday that the cervical exam may cause some spotting and that it did.  And cramps.  I feel like it's that time of the month.  Although, it wasn't bad enough to keep me awake at night.  I got a good 8 or 9 hours of sleep last night.

I have now officially passed my due date.  But no big deal.  I'm in no hurry for him to get here--keeping him in longer will make sure he's fully ready.  Plus, I'm still trying to enjoy "me" time.  Every time I go somewhere I make sure to appreciate it.  I know life is about to forever change.

Today, in a couple of minutes, I'm heading back in for my 40 week appointment.  I think it's a standard appointment but then on Thursday they'll check for any signs of distress, loss of fluid, etc and go from there.

But for now, I'm still comfortable--much to the dismay of anyone who asks.

I went in for my 39 week appointment and everything is still going well.  I'm still sporting cankles, despite the cooler weather we've had, bubby's heartbeat was 156 today, my blood pressure still good.

I did decline the cervical check because really, what will that do for me?  So they tell me I'm dilated to 2 cm...I could stay there for 2 more weeks!  No thanks.

The plan of action if baby does not arrive by Monday is to return to the doctor's office Monday afternoon.   Routine appointment, I think.  But then if still no baby we return to the doctor on Thursday for a Non Stress Test, ultrasound, and cervical exam.  Then we'll go from there.

This is all still seeming very surreal.  I know the moment I see him I will fall head over heels for him, but I think there's a lot of self-preservation going on in my brain.  I know he exists but it's not totally real yet.

Thanks to my wonderful friend Jody, I have a birth plan.  I had the hubs read it over the other night and he thought I was being too particular.  I had to explain to him if I didn't say what I wanted, I might get talked into something I really don't want.  I'm glad that I'll have it with me. 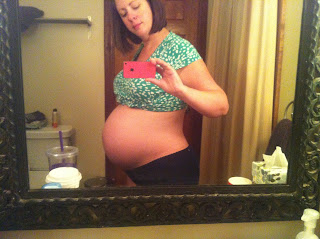 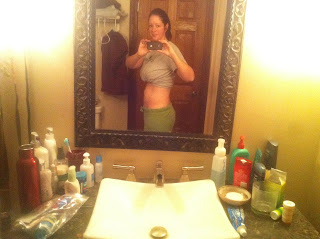 Little different.
Posted by HD at 3:53 PM No comments:

I've now made it to 36 weeks.  The time of weekly doctor's appointments, back pain, and people thinking I'm fragile.  I appreciate the thought but it's starting to piss me off.  I'm good people, promise.

Starting this Monday I'm scaling back to working half time--mornings.  I'm feeling incredibly guilty about this decision.  However, every day around 10 am I have excruciating back pain.  It hurts to sit.  So then I stand.  Then I teach on my feet and I get cankles and ballooned feet.  No win.  But I'm trying to work through feeling guilty about just leaving my kiddos.  I know they'll be fine but I feel badly about leaving them at the end of the year.

I did take a few pictures the other day.  9 months pregnant.  Wow. 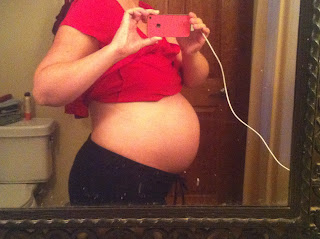 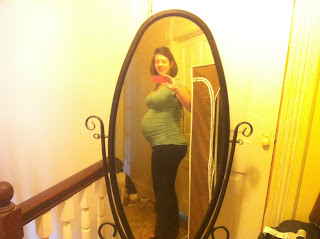 How Things Have Changed

The hubs recently took to worrying about me.  How sweet.  It's sweet because up until recently I couldn't tell if there was much concern.  That might sound terrible but it's not meant to.  It was almost like the hubs was just chugging along like normal and not showing too much emotion about it--survival.  But now...it's sweet.

I looked at my last post and the picture I posted--I remember thinking how big my belly was getting.  Psha!  That's nothing.  And I know this is still nothing.  But here are some more recent photos. 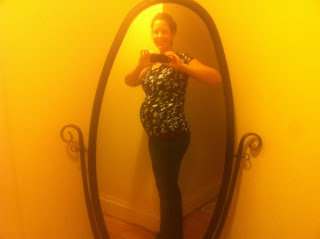 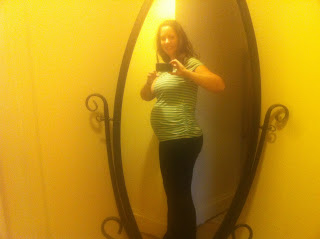 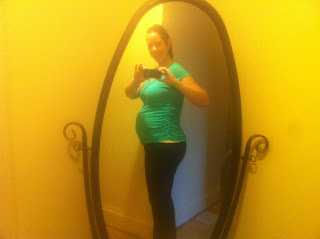 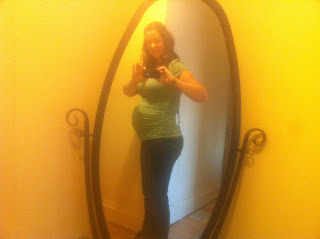 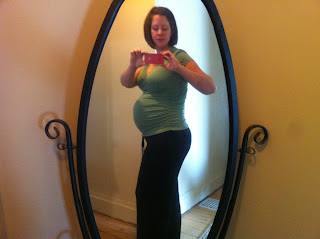 This last photo was about two or three weeks ago.  I'll have to take another one soon!